In our current age of Royal Canadian Mint product proliferation – at last count, more than 150 different coins and sets for 2014 alone – it is interesting to contemplate when the actual birth of “Mint Set” production as an industry took place. In other words, when the production of specially-prepared sets of coins went beyond simply VIP or occasional Mint-tour souvenir production, and became a deliberate, annual “product line” for sale to collectors.

Indeed, “Mint Sets” have existed sporadically from the first opening of the Ottawa branch of the Royal Mint in 1908, however today the known actual population of these early sets could be counted on the fingers of both hands, and remain exceptionally rare. Thus, while you could certainly have visited the Mint in 1946, for example, and purchased a “Specimen Set” of the day’s coinage for a marginal premium, very few people appear to have done this. With the exception of a couple important commemorative years, therefore – such as 1908 and 1937 – the production (or rather, the “assembly”) of Mint Sets remained essentially an “on-demand” service.

In my own view, this essentially changed in 1954, with the production of 3,000 “Proof-like” (or mirrored-finish) coin sets, housed in a white cardboard holder and offered for sale to the general public at $2.50. The first of seven consecutive years of sets housed in this format – each with significantly increasing mintages – this simple issue was very much the watershed moment in the Mint’s transition from simply a producer of circulating national coinage to caterer to the Canadian coin collecting public. And indeed, this original “Proof-like” set series continues to this day, albeit having morphed packaging from cardboard holder to sealed pliofilm pouch, beginning in 1961.

In the mid-1960’s, demand for these sets exploded with the introduction of a new obverse portrait of Elizabeth, as well as the elimination of the use of Silver in United States circulating coinage after 1964. Ordering for, and provision of these sets resulted in an absolute frenzy, and of course our Mint has never looked back.

Easily lost in all this discussion of Mint product-mania and the origins of collectible vs circulating coinage, however, is one of the most interesting numismatic enigmas of the post WWII 20th century – the 1953 “Mint Set”.

My use of italics here is quite purposeful. With the ascension of Elizabeth II, and the preparation of new coinage dies, three different qualities of 1953 coinage evolved. The first, a general business-strike, saw more than 110 million coins put into circulation with a typical brilliant finish. Also struck were coins with a finish that would soon come to be know as “Prooflike” – using specially-polished dies, which created coins with true mirrored fields. Lastly, a series of “Specimen” coins were struck, also using specially-prepared dies but resulting in mirrored-finished surfaces highlighted with eye-popping “cameo” (or frosted) portraits. This latter Specimen issue was made available in custom red presentation boxes with plush interiors, and remain quite rare today. But what of the packaging for the special “Prooflike” strikings? This, in my trademark meandering way, brings us at last to the enigma at hand.

In my 25 years of coin dealing, I would regularly come across what appeared in every respect to be a 1953 Proof-like coin set, housed in the standard white cardboard holder, enveloped in cellophane. In almost all cases, the Silver coins in these sets would be fairly heavily-toned, and clearly original in the sense of having been assembled at the Royal Canadian Mint (in contrast to the later popular trend of privately-assembling coins sets in similar purchased cardboard holders). Due to the referenced toning (or “tarnishing”, in non-collector terminology), it was challenging to determine the exact quality of the striking on these coins, however the sets were generally referred to as “Prooflike” sets. I was perplexed, however, by two observations.

First, the general market value of these sets, although varying considerably, never seemed to exceed $100, which seemed abnormally low in comparison to the follow-up 1954 set which retailed at several times this figure. Secondly, The Charlton Standard Catalogue of Canadian Coins began their Proof-like sets listings at 1954, and in recent years the publication acknowledges that the first use of the white cardboard holders was seen in 1953, neither this or any other reference seemed acknowledge the actual existence of 1953 Proof-like issues as a complete set.

So, were these mysterious sets not official Mint-issued products? Alternatively, were they indeed official products but with a subdued Proof-like finish that made them difficult to identify as such, in comparison to standard business-strikes?

In the end, the answer(s) to this question were both profoundly simple and remarkable, in the context of today’s precision design, production and assembly standards maintained by the Royal Canadian Mint.

In the end, these 1953 card-mounted sets were indeed assembled by the Mint, yet in terms of composition, they were done so with whatever coins happened to be on hand at time of assembly! In other words, while the majority of these sets were assembled using perfect business-strike coins that were removed from the ongoing production line, in many cases the sets were put together using not one, but often two or more different qualities of coinage! Thus any given 1953 “white card” set might contain all standard business-strike coinage, or it may contain a mixture of business-strike and true Proof-like coinage. Again, the best of whatever was simply on hand at the time of assembly!

This now explains two enigmas that have faced me. The first, why numismatic references (including Charlton) have chosen to exclude the 1953 issue from their Proof-like set listings. Yes, 1953 Proof-like sets do actually exist, however to list this rare set (which sells for thousands of Dollars) would simply cause far too much confusion (and false hopes!) among collectors who may have a “typical” 1953 set rather than one containing any Prooflike or Specimen components. After all, how to you properly list and value a set that may contain both business-strike and Proof-like coinage within the same holder?? Clearly, the variables to be encountered are just too great, and each and every 1953 set therefore has to be valued based on its own unique merits.

The second enigma that now becomes clear in all of this to me, involves one of these 1953 white-card sets I purchased earlier this summer. Not just a typical 1953 set, and not just yet another intriguing 1953 “combination” set. But rather, the single most unusual (and arguably important) 1953 set I have encountered in 25 years of dealing.

For housed within this pristine, still-sealed white-card mounted set was the following remarkable breakdown of coinage:

Quarter – the most stunning Specimen striking I have encountered, with an eye-popping white cameo portrait of Elizabeth

Half Dollar – an extremely rare “Large Date No Should Fold” Specimen striking, only the second example ever certified by ICCS

Dollar – finally, yet another rare and lovely Specimen striking, with distinct frosted cameo

In summary, one could look at the above set as an inconsistently-prepared product that would very likely be rejected by today’s minting quality-control standards. Or, as would be the position of myself and just about every other student of numismatics and history, a precious and truly remarkable enigma from, arguably, the very birth of the Canadian numismatic industry as we have come to know it today. While not every 1953 “white-card” set will yield these same treasures, each will nevertheless be very likely to differ from the next, and warrant its own close attention and scrutiny. How often can you say that, in the context of today’s highly-automated mass production? 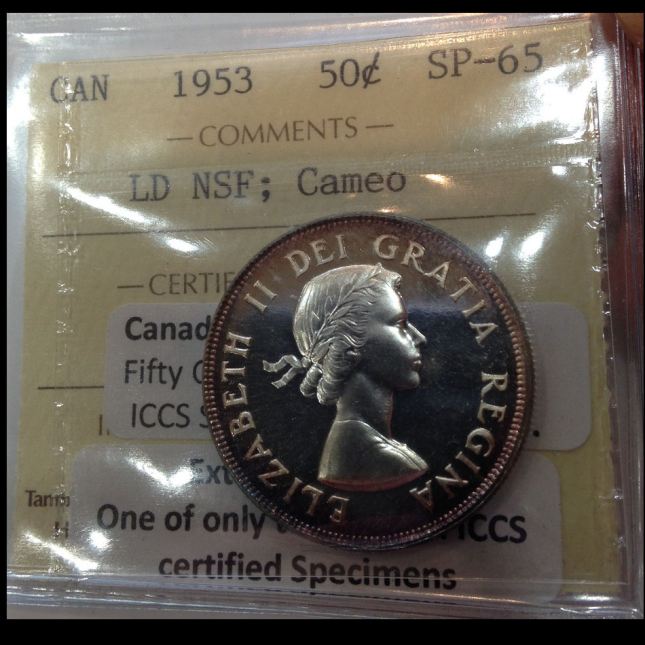 5 thoughts on “When is a “Mint Set” really a Mint Set? A Look at the Enigmatic 1953 Coinage issue”